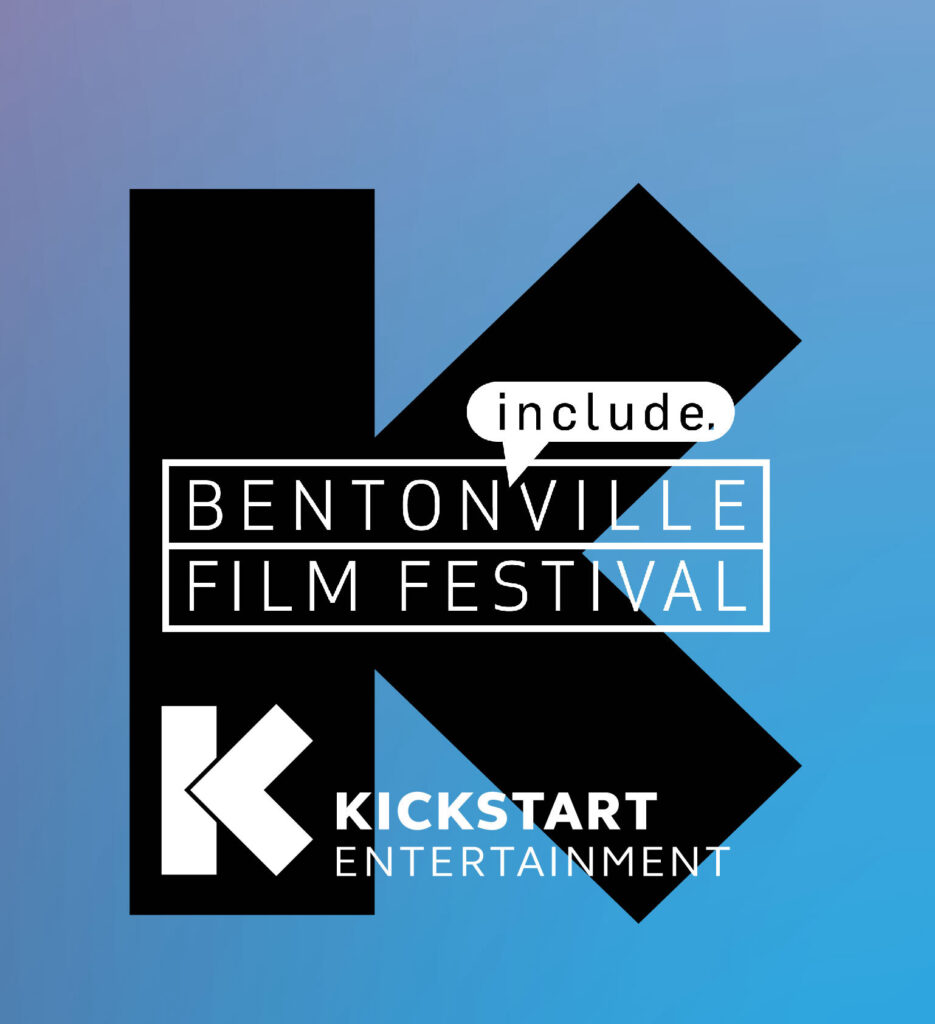 Transgender Awareness Week (November 13 – 19) is a week when transgender people and their allies take action to bring attention to the community by educating the public about who transgender people are, sharing stories and experiences, and advancing advocacy around the issues of prejudice, discrimination, and violence that affect the transgender community.

We wanted to share a few BFF Alumni Films that are about and/or created by people that are transgender or non-gender conforming. Please join us in sharing these wonderful and important films because trans lives and stories matter all the time.

To Be With You

Alex is in L.A. for 24 hours to reclaim their father’s ashes but, along the way, they find an old love, a beauty in the city, and a final connection to the past. 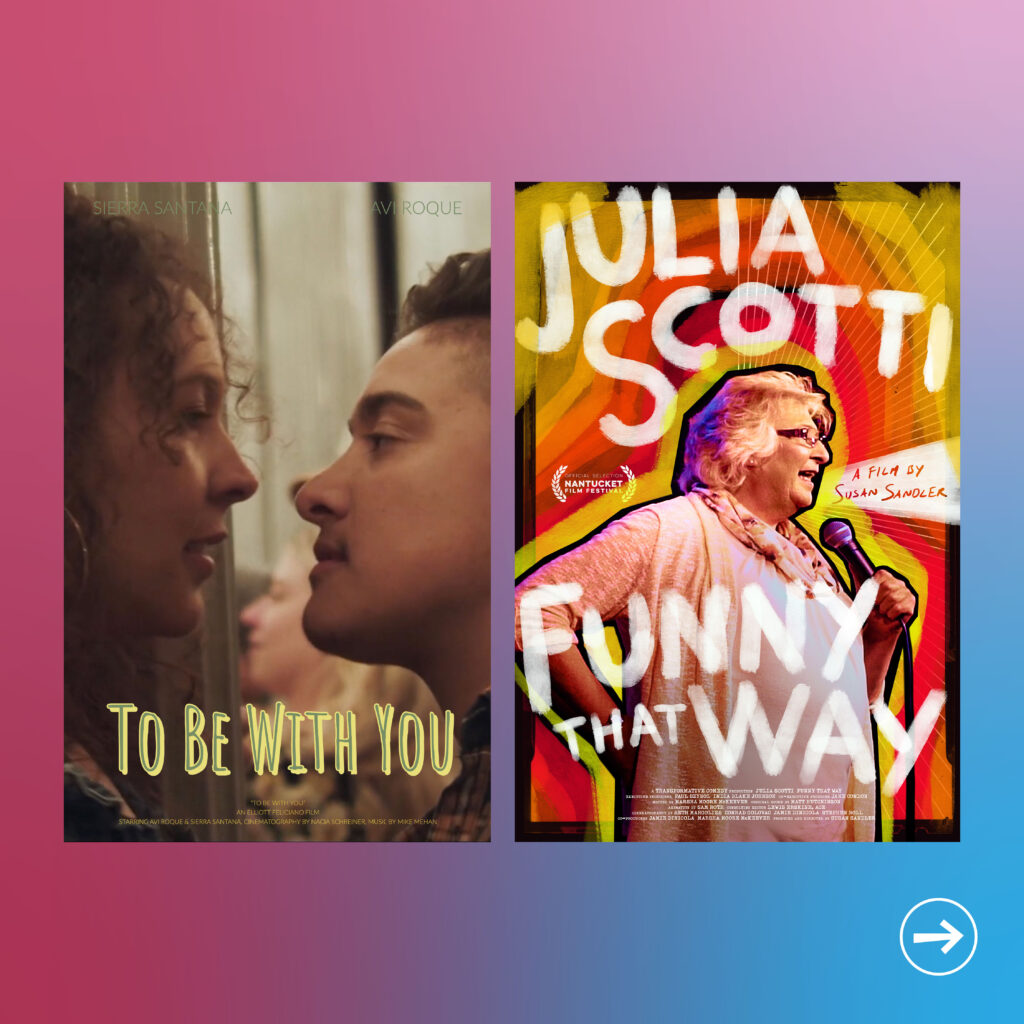 With breathtaking emotional honesty, this tender, funny, and powerful portrait of transgender comedian Julia Scotti explores the unrelenting courage and humor it takes to be Julia. In the comedy boom of the 1980’s Rick Scotti was a busy guy—appearing in clubs across the country, on bills with Chris Rock and Jerry Seinfeld, when he came to the dawning realization that nothing felt right. At a time when the words gender dysphoria and gender reassignment surgery were rarely heard, Rick’s true awakening at age forty-seven led to a new identity as Julia Scotti. Shot over a period of five years, the film tracks Julia’s triumphant comeback and the complex process of reuniting with her children, as comedy becomes the shared language of identity, healing, and joy.

LINGUA FRANCA follows an undocumented Filipina trans woman Olivia after she has secured a job as a live-in caregiver for Olga, an elderly Russian woman in Brooklyn’s Brighton Beach neighborhood. Olivia’s main priority is to secure a green card to stay in America. But when she unexpectedly becomes romantically involved with Olga’s adult grandson Alex,  issues around identity, civil rights and immigration threatens her very existence. 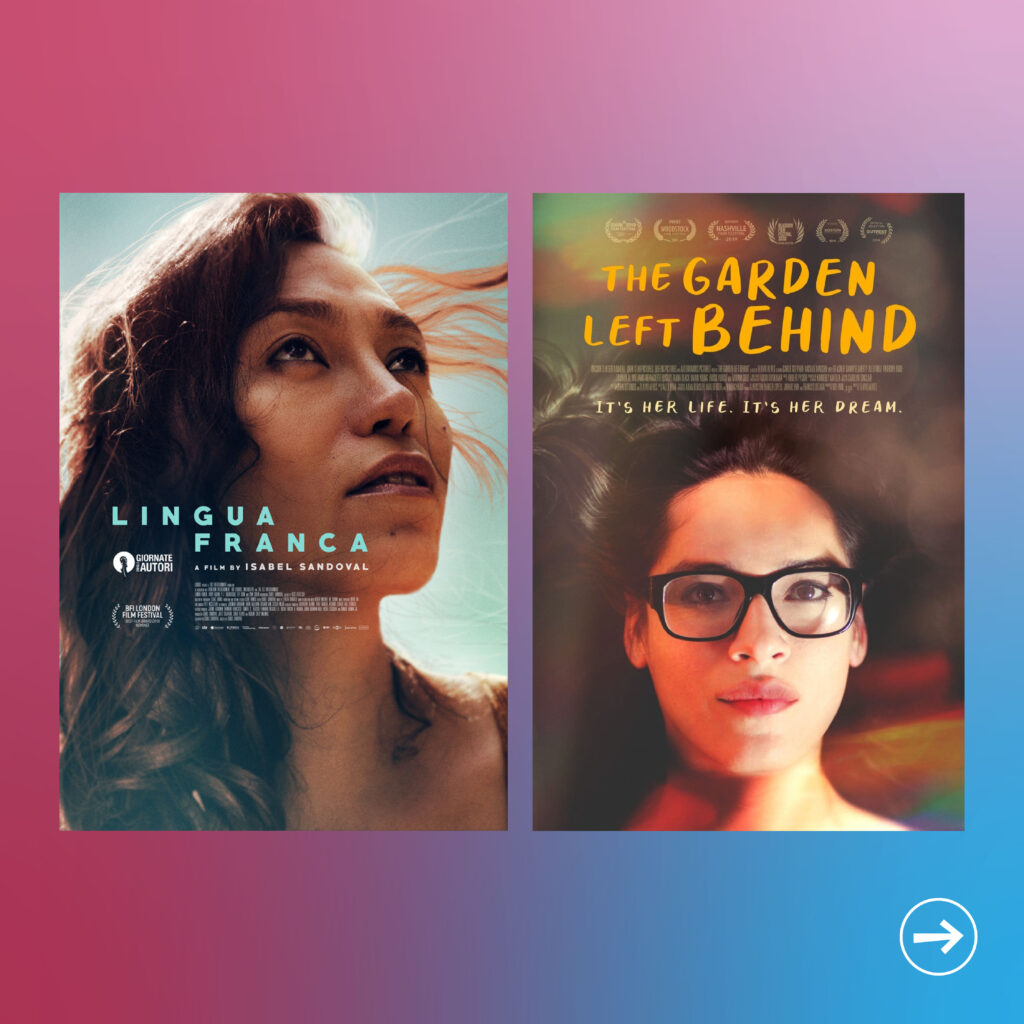 The Garden Left Behind

2019 Audience Award for Best of Fest

Driving a cab through the lonely streets of New York, Tina struggles to provide for herself and her grandmother. Being undocumented makes work difficult to come by, and to add more stress, Tina has begun the transition process. While her doting grandmother endeavors to understand, Tina finds warm support in a group of trans activists that take her under their wing. Tina waits impatiently for her doctor to sign off on her transition so she can begin taking hormones, eager to join her trans sisters. But mounting medical costs, her rocky relationship with the man she’s been seeing, and her legal immigration status all become daunting obstacles in Tina’s pursuit of happiness.

Emmy® nominated, award winning, and bisexual filmmaker Fiona Dawson hosts “NOW with Fiona” revealing voices of hope from the streets of New York City in the WorldPride themed proof-of-concept show. Taking inspiration from the visionary gay politician Harvey Milk, and Kate, an indomitable Honduran transgender woman seeking asylum, Fiona demonstrates that we are all legends unto ourselves. Starting with Season One in Texas, Fiona explores unexpected, yet positive LGBTQ+ stories from all facets of life through an intersectional and non-binary lens. 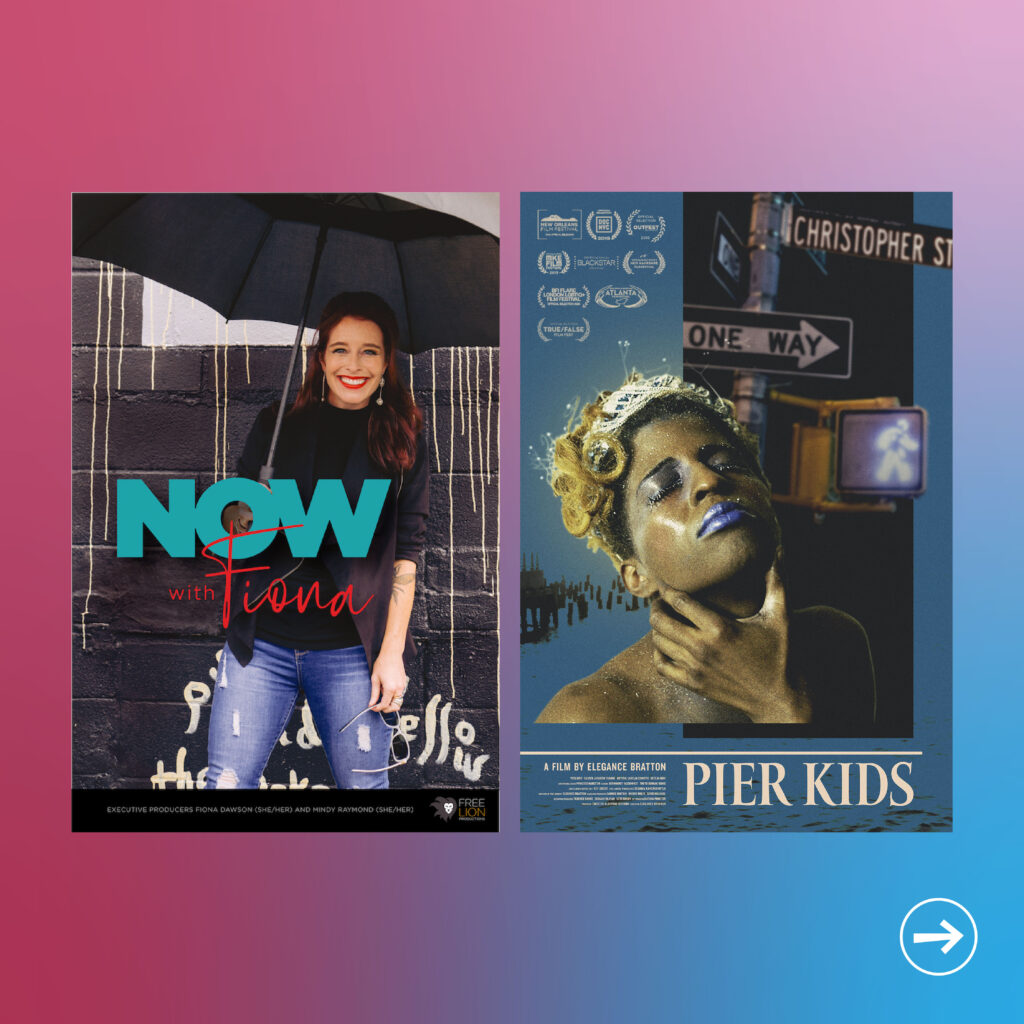 On the Christopher Street Pier in New York City, homeless queer and trans youth of color forge friendships and chosen families, withstanding tremendous amounts of abuse while working to carve out autonomy in their lives. With intimate, immersive access to these fearless young people, PIER KIDS highlights the precarity and resilience of a community many choose to ignore.

By day, Ed Popil worked as the manager of a telemarketing center in post-industrial Rochester, New York for 18 years.  By night, he transformed into drag queen Mrs. Kasha Davis. Not your average aspiring pop star drag queen, Mrs. Kasha Davis is a 1960’s era housewife trying to liberate herself from domestic toil through performing at night in secret – an homage to Ed’s own mother. After seven years of auditioning to compete on reality television show RuPaul’s Drag Race, Ed Popil was finally cast onto the show and thrust into a full time entertainment career at the late age of 44. 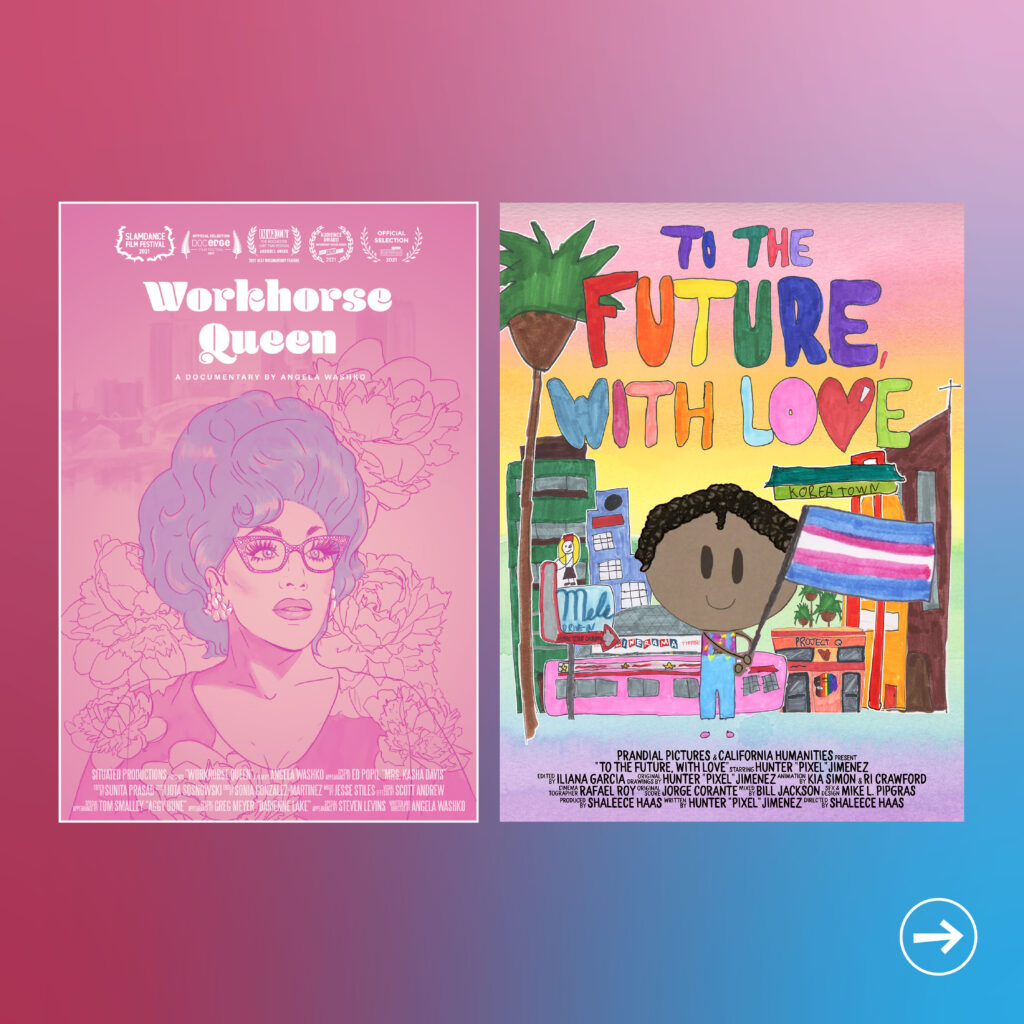 To The Future With Love

Meet 19-year-old Hunter “Pixel” Jimenez, a nonbinary trans boy caught between the expectations of his Guatemalan immigrant family and his dreams of living happily ever after.

Billy Bloom is one-of-a-kind: a fabulous, glitter-bedecked, gender-bending teenager whose razor-sharp wit is matched only by his outrageous, anything-goes fashion sense. When his glamorous mother is forced to send him to live with his straight-laced father, Billy discovers that he’s like a diva-out-of-water at his new ultra-conservative high school. Undaunted by the bullies who don’t understand him, the fearless Billy sets out to make a big statement in his own inimitable way.

CHANGING THE GAME takes us into the lives of three high school athletes—all at different stages of their athletic seasons, personal lives, and unique paths as transgender teens. Their stories span across the U.S. — from Sarah, a skier and teen policymaker in New Hampshire, to Andraya, a track star in Connecticut openly competing on the girls track team. The film centers on Mack Beggs, who made headlines when he became the Texas State Champion in girls wrestling – as a boy – and all he wanted to do was wrestle on the boys team.

THESE THEMS is a seven episode (8-10 minutes each), fully narrative digital series following the lives of four queer friends in NYC. The show was filmed in Manhattan and Brooklyn in December 2018 and is currently in post-production. After realizing she may be a lesbian, Gretchen quickly befriends non binary dog walker Vero, who decides to stop training dogs and start training the straights. Vero takes Gretchen under their wing and introduces Gretchen to the queer world as she navigates what it’s like to be newly out at the age of 30. We follow our four main characters through their lives in New York City as they navigate their world with an intersectional cast of queer and straight characters. 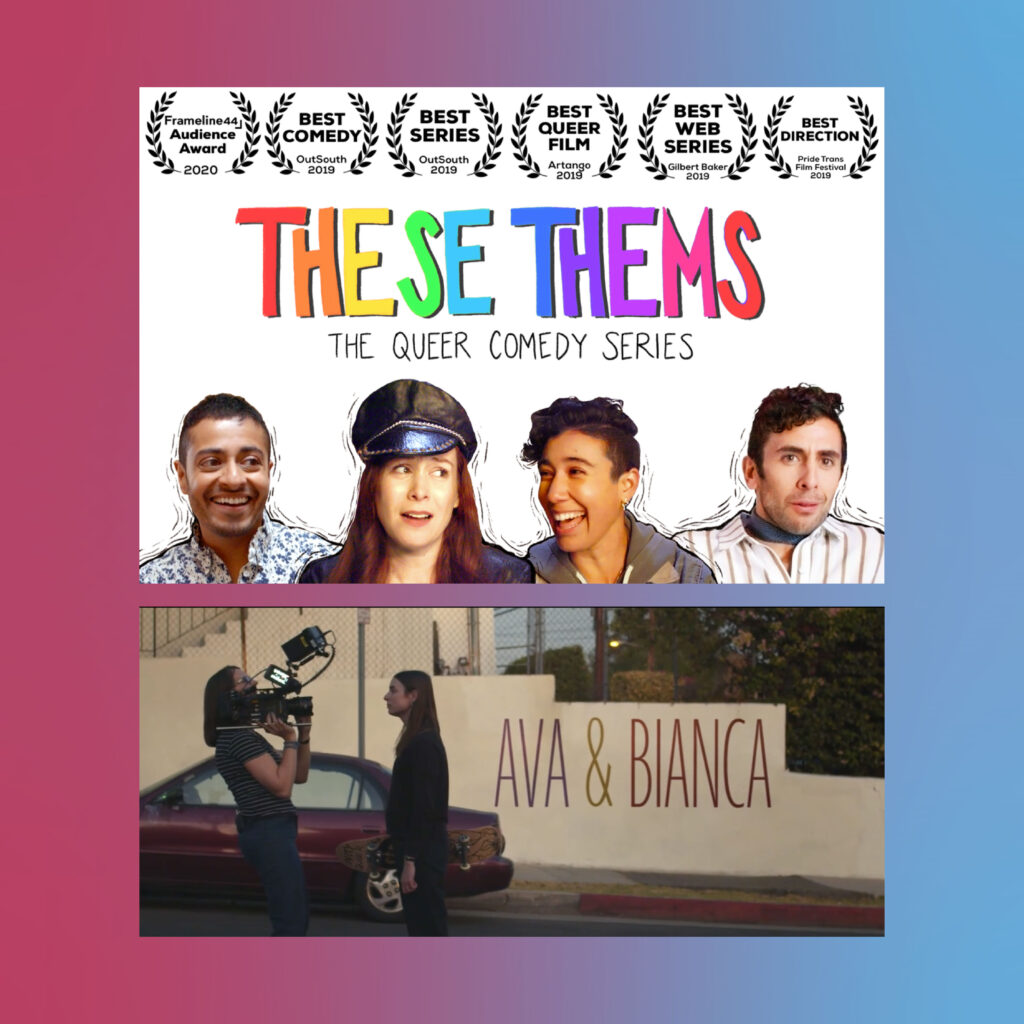 The number of women in the film and television industries has been on a slow but steady increase with campaigns for equal representation, in front of and behind the camera, leading to more inclusive film sets. However, it can still be an isolating space for individuals like Bianca Cline and Ava Benjamins who are two—if not the only—trans cinematographers from Mormon families working in the US.