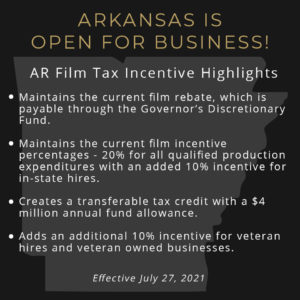 With near unanimous support, Act 797 didn’t make waves in the legislature but it will have a major impact on the film industry in Arkansas.

Among other changes, Act 797 provides additional incentives for hiring veterans and offers a transferable tax credit for productions in the Natural State. The law is expected to generate substantial economic benefits for state and local governments.

“It’s our hope that the new tax credit will make it possible for more Arkansas filmmakers to live, create, and work in the state that we all love,” said Arkansas Cinema Society Executive Director Kathryn Tucker.

“Most of the universities and colleges in Arkansas have budding film programs – and they are growing,” said Christina Arquette, Producer and ACS Board member. “This bill is about creating job opportunities to keep our talent at home in Arkansas, so our Arkansas-educated homegrown talent don’t have to move to other states that are offering film incentives – like Georgia, Oklahoma, Alabama, and Louisiana.”

The transferable tax credit model, has a proven track record in other states of fostering a sustainable film economy, providing increased tax revenue at all levels of government, and generating opportunities for good paying jobs.

Screenwriter Graham Gordy and ACS Founding Board Member noted, “In 2019, Arkansas saw a huge economic boost when True Detective Season 3 filmed in Arkansas, and I was proud to be a part of the effort to bring that production here. I am equally excited about what our new incentive can do to attract more film investment to the Natural State. This is about employing Arkansans in Arkansas with new investments from outside our state.”

Governor Asa Hutchinson signed Act 797 into law on April 20, with bipartisan support. The Arkansas Cinema Society is developing a toolkit to help filmmakers better understand the new tax credit and give them the resources and contacts they need to be able to navigate the new process.

“I’m one of those Arkansans who, years ago, had to leave to find work in my industry. I’m hopeful with the passage of this new law and continuing support from our elected officials, that will no longer be the case for Arkansas filmmakers because we will have sustainable industry work right here at home,” said Tucker.