A 48-hour Screening Benefit and Conversation to #STOPASIANHATE
with GEORGE TAKEI and DR. KAREN KOREMATSU.

As we continue to amplify the #stopasianhate movement and also celebrate AAPI Heritage month, we are excited to announce a very special screening of Karen Day’s 2019 alumni film BAMBOO AND BARBED WIRE taking place MAY 22nd – 23rd! In addition to the 48 hour virtual screening, there will be an exclusive conversation following the film with George Takei and Dr. Karen Korematsu. A portion of ticket sales for the event will benefit the Fred. T. Korematsu Institute.

We hope you will join us in this impactful virtual event in partnership with Bamboo and Barbed Wire and the Fred. T. Korematsu Institute.

Get your tickets HERE! 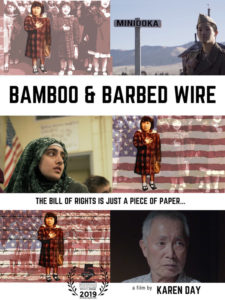 At age 15, Lubna Al Aboud immigrated to the US as Syria crumbled amidst deadly gas attacks from President Bashar al-Assad and bombings by terrorist rivals, Isis. Her Muslim family settled in Boise, Idaho the year President Trump ordered the Muslim Travel Ban and Japanese Americans commemorated the 75th anniversary of President Roosevelt’s Executive Order 9066, incarcerating 120,000 Japanese American citizens after the bombing of Pearl Harbor. Against great odds then and now, Lubna and former incarcerees of the Idaho concentration camp, prove the human spirit prevails with resilience, forgiveness, hard work and hope even in America’s darkest times. This film promises to stir a controversial public groundswell as Idaho ranchers, discussing their own experience of the nearby incarceration camp, reveal a profound secret hidden in the Snake River Plains.

George Takei is a social justice activist, social media superstar, Grammy-nominated recording artist, New York Times bestselling author, and pioneering actor whose career has spanned six decades. He has appeared in more than 40 feature films and hundreds of television roles, most famously as Hikaru Sulu in Star Trek, and he has used his success as a platform to fight for social justice, LGBTQ+ rights, and marriage equality. His advocacy is personal: during World War II, Takei spent his childhood unjustly imprisoned in United States internment camps along with 120,000 other Japanese Americans.

He now serves as Chairman Emeritus and a member of the Japanese American National Museum’s Board of Trustees. Takei served on the board of the Japan-United States Friendship Commission under President Bill Clinton, and, in 2004, was conferred with the Gold Rays with Rosette of the Order of the Rising Sun by the Emperor of Japan for his contribution to US-Japan relations. 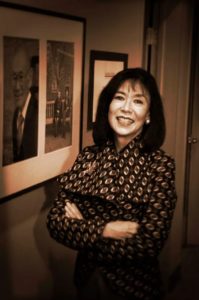 Dr. Karen Korematsu is the Founder and Executive Director of the Fred T. Korematsu Institute and the daughter of the late civil rights icon, Fred Korematsu. Since her father’s passing in 2005, Karen has carried on his legacy as a public speaker, educator, and civil rights advocate. She shares her father’s passion for social justice and education and in 2009 established the Fred T. Korematsu Institute to advance racial equity, social justice, and human rights for all. The Institute’s work has expanded from K-12 civic education to promoting Public civic engagement and participation. Karen crisscrosses the country speaking to audiences from Kindergarten to Judges and inspiring all to establish in their State the Fred Korematsu Day of Civil Liberties and the Constitution on January 30, in perpetuity.

Karen’s work extends to advocating civil liberties and social justice for all communities and addresses current issues that draw upon lessons of the past. In 2015, Karen was inducted as the first non-lawyer member of the National Asian Pacific American Bar Association. She serves on the board of directors of Asian American Advancing Justice-AAJC and NAPABA Law Foundation. In 2017, Karen was Co-chair of the Annual NCSS Conference and is a “Honorary Member” of CS4, Council of State Social Studies Specialists.

More About the Fred Korematsu Institute!

Based in San Francisco, the Korematsu Institute was founded as a local community and education program to inspire students and the public by sharing Fred Korematsu’s American story. The Institute broadened its mandate in 2010 when California established Fred Korematsu Day of Civil Liberties and the Constitution. Now a national organization, its vision is to uphold everyone’s human and civil rights by encouraging people to, in Fred Korematsu’s words, “stand up for what is right.”

READ MORE AND LEARN HOW YOU CAN SUPPORT HERE!

And donate to their Give in May Campaign!